Vietnam offers many advantages for international IT buyers. These advantages include:

Let’s look at each of these advantages and what they mean for you.

A Large and Growing Talent Pool

With more than 100,000 software developers and 75,000 digital content specialists currently in the IT workforce, Vietnam provides a deep talent pool for international tech companies. And with over 40,000 new graduates from IT-related programs each year, the IT workforce is growing rapidly.[1]

Why such rapid growth? Vietnam has a young, tech-savvy population with a strong interest in IT careers. Students gain exposure to computer science at a younger age than in many Western countries, and gain high marks in international science and technology exams.[2] And industry surveys show a passion for technology that is unique and impressive.[3] 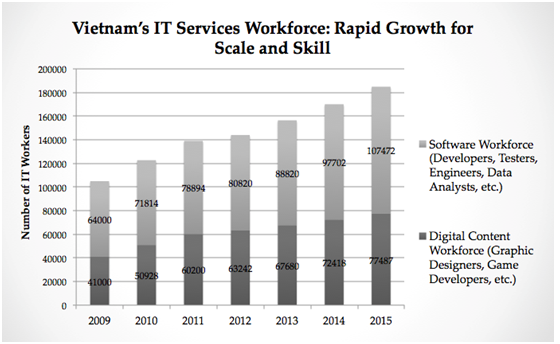 Vietnam has hundreds of established and experienced IT services companies. This includes large, full-service companiesthat can provide the scale on major projects. It also includes a growing number of notable boutiques that offer specialized expertise and services in niches like mobile applications, games development and embedded software.

With such a wide range of providers, there’s something for customers at every point on the value chain. Some firms specialize in basic development, testing and maintenance work. Others have the skills to handle complicated projects requiring the newest programming languages, advanced product design and even original Research & Development.

This breadth of capabilities has attracted many of the world’s largest multinationals, including big names like HP, Alcatel-Lucent, Cisco, NTT, Toshiba, Panasonic, Sony and many others. It has also attracted SMEs and start-ups seeking value as they build and maintain their products.

Vietnam’s government is strongly committed to growing its tech industry. Policies to promote the industry include special enterprise zones, tax breaks and grants for tech companies. They also include infrastructure investments like new software parks and improved ICT connectivity.

These are not temporary policies. As a one-party state with firm political leadership, Vietnam’s leaders are able to make strong, long-term decisions. Political stability also means social stability. While some IT hubs have unpredictable government policies and occasional social upheaval, Vietnam offers consistency and reliability.

Located in Southeast Asia, Vietnam sits just a few time zones behind Japan, Korea, Australia and other leading economies in the Asia-Pacific region. Likewise, Vietnam is just a few time zones ahead of Germany, the United Kingdom, France and other leading European countries. Daytime, synchronous communication is easy, and development centers are just a short flight away.

Although far from North America, Vietnam is also a major supplier of IT services to companies in Canada and the United States. The time difference is rarely an issue, and sometimes even an advantage in situations when development, maintenance and testing work is best done at night.

More so than any other developing country of comparable size, Vietnam’s tech companies are working to develop the talent pipeline for the future.[4] They are actively partnering with universities, high schools, local NGOs and foreign governments to build new, modern educational programs and facilities, which will ensure that Vietnam’s IT workforce stays current and valuable to foreign buyers.

Recently, one notable program is the Higher Education Engineering Alliance Partnership (HEEAP), a $40 million program to improve tech education at Vietnam’s universities. Founded by Intel, the United States Agency for International Development and Arizona State University, they’ve already provided advanced training to thousands of Vietnamese professors, and have big plans for the future.

Another notable program is Vietnam-German University (VGU), a technical school that recently received a $180 million loan from the World Bank to build a new campus for 12,000 students. With a large and growing computer science program, VGU aims to become a leading research university in Asia.

Don’t just take our word for it. Numerous studies by independent research and consulting firms rank Vietnam as one of the world’s most competitive and promising outsourcing destinations. In 2011, AT Kearney’s Global Services Location Index rated Vietnam as having the #1 most financially attractive workforce in the world. In 2014, Vietnam was listed as one of Gartner’s Top 30 Offshore Services Locations. And in 2015, both Ho Chi Minh City and Hanoi ranked as Top 20 cities in the Tholons Top 100 Outsourcing Destinations study.

Due to the size of Vietnam’s talent pool, and the low costs of living and doing business in Vietnam, the country’s IT workers offer some of the best value for talent in the entire world. And because supply of IT workers consistently outstrips demand, wages are unlikely to rise in the near future.

Another advantage of Vietnam’s tech workers is strong loyalty to employers. Low attrition keeps HR and training costs down. It also ensures dependability and integrity among tech teams, which is particularly valuable for companies seeking long-term development and maintenance contracts.

Beyond IT outsourcing, Vietnam is gradually emerging as a global hub for tech products and services of all types. Major electronics manufacturers like Intel, Samsung and LG are investing billions in new factories, while multinational product companies like Atlassianare choosing Vietnam as a location for offshore development centers. In total, Vietnam’s tech industry produced nearly a $40 billion in revenue in 2013. 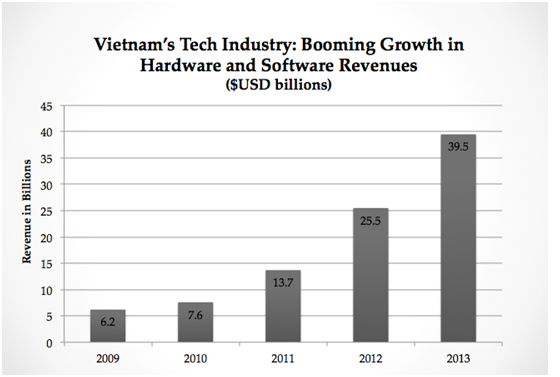 With a young population, strong economic growth and rapidly improving infrastructure, domestic demand for tech products and services is also growing. Many companies doing more than just producing products in Vietnam—they see Vietnam as a high-potential expansion market as well.

[1] Vietnam Information and Communication Technology White Book—2014, p. 43 and 87. The chart includes projections based on workforce growth rates of 10% for the software industry and 7% for the digital content industry.

[3] “Vietnam’s IT Workers Value Passion over Pay,” by Will Greene in Techonomy, February 2015. http://techonomy.com/2015/02/vietnams-workers-value-passion-pay/